How a Welsh estate is connecting residents through wildlife

We visited Cat from HETRA – Hollybush Estate Tenants and Residents Association to learn about their latest project. Here she tells us how the Grow Wild grant has helped them to connect residents and engage younger audiences in local biodiversity.

The purpose of the project is to encourage more members of the community, particularly the younger members, to get involved in gardening on the Hollybush Estate. We have an established garden, but we wanted the children to understand what we're doing, why and for them to feel like they have ownership of the space.

The children living on Hollybush Estate don't have much space to play in, most of them don't have gardens and a lot of them don't even have a balcony. They hang around in the communal outdoor areas a lot, but they often don’t seem comfortable going on the grass. Many of the children don't know about the importance of plants, insects, or that they're losing valuable green space around them. We wanted to make this a happier, nicer place for them to spend time.

'Many of the children don't know about the importance of plants, insects, or that they're losing valuable green space around them.'

There’s been a long running ‘us’ and ‘them’ attitude between Hollybush Estate residents and the local council. Because it’s a council-maintained space people have felt as if they don’t have responsibilities or rights for the area. This is gradually changing for example people use it for dog walking and although the dogs will walk on the grass owners stick to the paths. Many people sit on the concrete outside their garage instead of sitting under a tree on the grass. Hopefully people will start valuing the trees more as they realise it's nice to have cool, shady areas to sit under and watch nature. 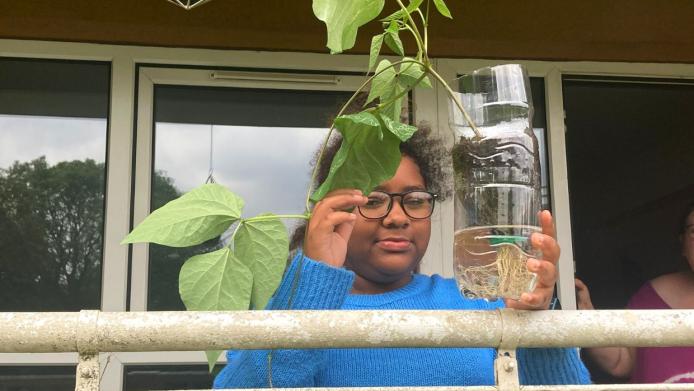 A young person from the Hollybush Estate getting into growing

We ran a taster session building shelters to get the children involved when they were outside playing. We have done loads of different activities as part of the project so far including pollinating, bug hunts, drawing, willow sculpture, tie dyeing foods and cooking activities with produce grown in the garden.

Having the funding for the project has made things easier and enabled them to happen without constantly having to ask people for things for free. We were able to buy specific tools and plants to use in the sessions we have done with the children, provide volunteers with financial support for transport and feed everybody who attended our sessions. We have some great wildflower areas containing native plants, so we've been studying those talking about pollination and looking for pollinators. There’s also a couple of new areas that we've dug that will get planted up with wildflower seeds in the autumn or the spring.

Since we started working in the space there’s been an enormous difference. It used to be bare - there was nothing there but grass. We have done some pollinator monitoring and seen a massive increase in bees and butterflies. I've also been doing it with the kids with the ‘Seek’ app by iNaturalist to identify bugs and plants. Many species have been displaced locally due to changes in the nearby meadows, so we want to put birdhouses up and get bat boxes into some of the big trees. We also want to attract more dragonflies and beetles as there’s not many of those, so we would like to create more pond areas for them.

'Since we started working in the space there’s been an enormous difference... We have done some pollinator monitoring and seen a massive increase in bees and butterflies.' 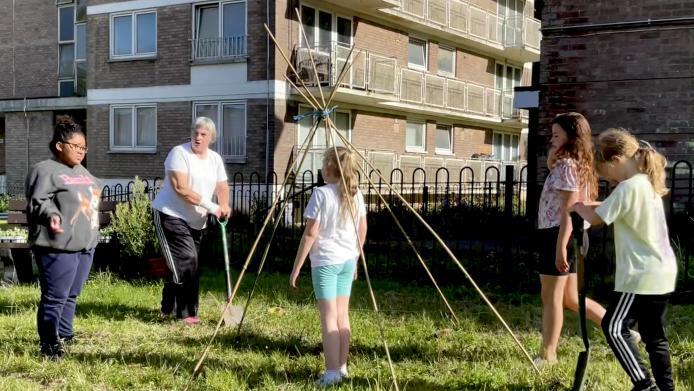 It's been a difficult balance having the project be child-led, whilst also letting them play, be themselves and stick to safety rules. Going forward we would like to speak to the children’s team at Cardiff Council to see if we can get some additional mentoring support, potentially for groups we have struggled to engage such as children with specific behavioural needs.

We would also like to get younger people involved in the Residents Association. Traditionally it has had an older audience. The current Chair does a brilliant job but getting people in their 20’s-30’s involved has been hard. They're often busy working or having a family but younger parents are a real target group. We're hoping to host a coffee morning, inviting parents with preschool and nursery school kids, where we show them what we've got and what they can do to involve the kids

In addition to the project on Hollybush Estate I've been working with another Grow Wild project, Global Gardens. I do a workshop called Making and Mending, a gentle session for people like me, who struggle to do the digging but still love being in the garden. There's an amazing variety of plants down there at Flaxlands Allotments. 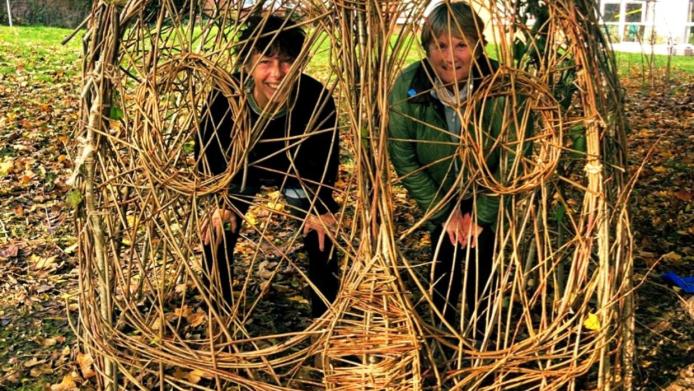 The leader for the Global Gardens project did a talk about native dye plants which we followed up with an outdoor dye session, using native dye plants and things grown there like Madder, Woad, Scabious and Goldenrod. We buried jars of dye and fabric in compost as the heat activates the dyes. Global Gardens are going to make a display of the fabric we dyed. They’re also looking to create a resource with information about those dye plants, where they are in the garden and connections to online resources like recipes. I also did tie dyeing with the kids on Hollybush Estate, so there's a crossover and I'd like to get some flax growing here somewhere next year.

The biggest personal challenge I had was a recent major surgery, which happened in the middle of planning the project. I was not able to do anything at all. I'm waiting for a hip replacement on top of that, so walking is difficult, and I don't have the energy to do what I'd like to. Next year is the year. COVID will be gone, my cancer gone, and my hip replaced. It's been difficult for me handing the project over to others. When you're not paying people, establishing who's doing what and people's roles can be difficult. I don't normally do the whole management of projects, I like to be really hands on, that's sort of what I'm best at so doing both was trickier. I'd rather somebody else do the managing so I can oversee and be with the kids as much as possible.

'When you're not paying people, establishing who's doing what and people's roles can be difficult. '

We noticed that since the project began people on the estate have seemed happier, friendlier and more people have been talking to each other. People have been gaining the confidence to come out, use the space more and smiling. As well as liking the space, people are communicating more, and there's been less trouble as people have been looking out there more and taking more pride in the place.

Find out more about HETRA, the work they are doing and other projects of theirs.

The project on the Hollybush Estate with HETRA - Hollybush Estate Tenants and Residents Association was one of seven projects supported by a Grow Wild Community Grant in 2022. If you're interested in applying for a grant or finding out more about the other groups funded, explore the resources below. 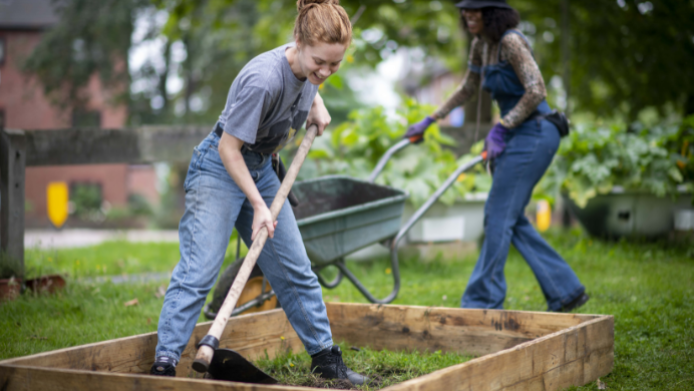 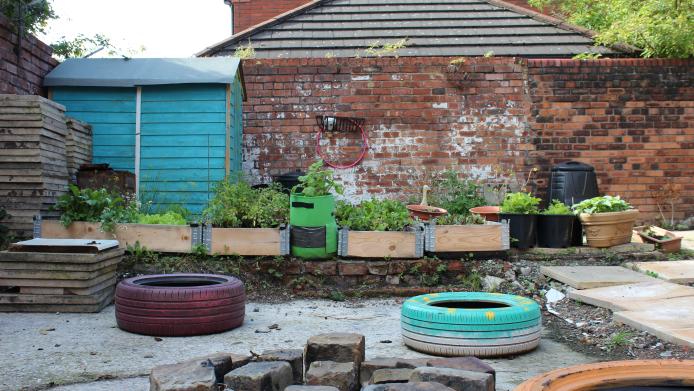