Why fungi are ecosystem superstars

As part of our fungus lab campaign, Grow Wild enlisted noted scientist Helen Czerski to try growing her own fungus and bring her scientific mind to the experience. Photo credit: Alex Brenner. 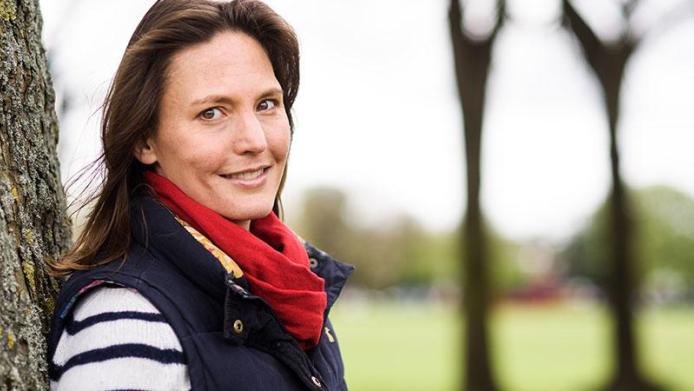 I have eaten a lot of mushrooms in my life.

They’re familiar and friendly-looking, with a distinctive texture and flavour that can make almost any meal better.

But let’s be honest: when you really think about them properly, they’re more than a bit odd. We know that they’re supposed to pop up in the dark, but no-one ever talks about where they pop up from, or what they were doing before any popping occurred.

Two months ago, I got this fungus in a box from Grow Wild and thought I should find out a bit more about my new house guest. And it turns out to be absolutely true that fungi are thoroughly weird, but they do it in the best possible way: by being more awesome than I had ever imagined!

The boxes turned up in the post, one for me and one for my neighbour Tom. We obediently followed all the instructions, sealed up the plastic bags full of straw, parked them in a corner and forgot all about them for four weeks.

The living world generates an awful lot of waste.

All those glossy TV documentaries showing amazing plants and animals bursting with life rarely show us what happens next. Things die, or get eaten or broken, and there are bits left everywhere: wood, bones, skin, wilted flowers and discarded nests.

Every year, life on Earth generates hundreds of billions of tons of these biological leftovers. But it doesn’t pile up, because our planet’s natural recycling system is astonishingly good. The heavy lifting is done almost invisibly, by two main groups: bacteria and fungi. My box of straw was about to be recycled by the experts.

A plant builds its own food from air and water, fuelled by sunlight. Animals can’t make their own food, so they need to eat what the plants produce (or eat other animals). But a fungus is neither an animal nor a plant. The tiny cells that make up fungi have some similarities to plant cells, but a fungus needs to eat.

The oyster mushroom in my box is a specialist in eating wood, although it would be perfectly happy with coffee pulp, sawdust, coconut shells or spent beer grain. This is an exceptionally adaptable species, and so while Tom and I were busy ignoring the boxes, the fungus was getting to work. 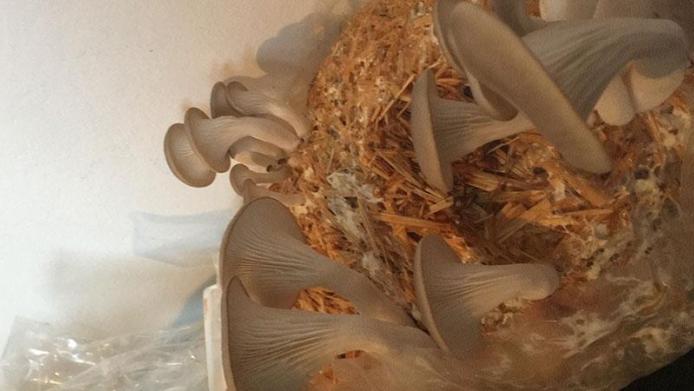 How do fungi break down organic matter?

The first job of a recycler is to get to the material that needs recycling. This fungus grows long thin tendrils called hyphae, each one just thinner than the thinnest human hair. These branch out and spread through the surroundings, building a network of white threads that burrow deep inside the straw. If one hyphae meets another one, they may fuse, providing cross-links in the network. This is what the mycelium is – a three-dimensional web with a huge surface area, growing outward into its environment, looking for food.

Scientific papers on this topic talk about 'foraging strategies' of different fungi – some send probing hyphae far ahead, and some make sure they cover every single millimetre of their territory while advancing only slowly. The hyphae are where the recycling starts, as they break down the straw around them and collect the nutrients inside.

After four weeks, we checked on the boxes.

Dense white matter was covering the straw on one side of each box.

Tom wrinkled his nose. 'It looks mouldy', he said.

I looked it up.

Fungi come in three types: yeast, mould and mushrooms. Now that we knew what mushroom-y looked like, we put them in the fridge.

This hidden stage of a mushroom can grow to an astonishing size. There’s a forest in Michigan which was discovered to have a 'humongous fungus': a single mycelium network (with identical DNA everywhere) stretching across 0.75 square kilometres – that’s more than 100 football pitches – and thought to be at least 2,500 years old.

Fungi like this are also so good at recycling that they can even recycle themselves, gathering up all the building blocks used for older parts of the fungus (which have recycled everything they can touch), and using them to rebuild new hyphae elsewhere.

Around 90% of plants have mycorrhizal fungi associated with their roots.

A mushroom fungus has two ways to travel.

The slow way is to grow its way across a forest. The faster way is to eject spores that can travel on the wind and start again somewhere else. But to do that, the fungus has to get them out into the air. My fungus clearly wanted to be elsewhere. Even before it was out of the fridge, I noticed the solid white mass spreading out of the neck of the bag. I’d spent quite a bit of time trying to squeeze the zip-tie tight, but the tiny whiff of air was apparently enough, and the fungus shoved itself through the gap.

This thing we call a mushroom is just a launchpad for spores, and so at this stage a fungus pours a huge amount of its recycled goodies into making the biggest and best launchpad possible. This is why mushrooms can pop up so quickly. All the building blocks have been quietly accumulating for weeks or months, and this is their big moment.

Fungi are hugely varied, but the one thing they have in common is an ability to recycle their surroundings, making atoms that have been discarded by other lifeforms available again to the ecosystem. This ability to gather materials is also being used by humans.

Scientists have been studying fungi that collect heavy metal contamination from their surroundings and package the metal neatly into their mushrooms. They’ve even been shown to hoover up the tiny traces of gold from electronic waste so that it can be recycled.

By the time the mushrooms popped up from our straw bags, I saw them in a whole new light. I can’t eat straw, but I can eat the mushrooms that recycled the straw. Their lifecycle is almost entirely hidden away, but they’re quietly doing an essential job, presenting us with a nice tidy mushroom when they’ve finished.

I’ve come to the conclusion that mushrooms shouldn’t be discretely hidden next to the carrots in the supermarket, pretending to be vegetables. They should be in their own section, labelled as ecosystem superstars.

Head to our page about growing your own fungi to learn more and start cultivating.