During the winter months we often bring nature into the home, creating festive decorations from greenery. Try some of these seasonal crafts using UK native plants to save money and celebrate the beauty of UK native species. 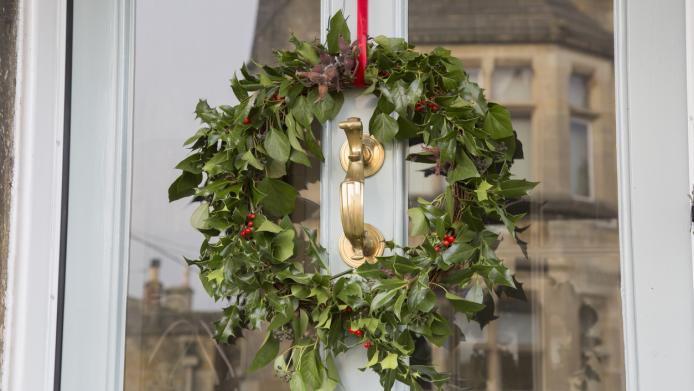 Dogwood or Hazel – These plants both have strong, flexible branches that are great for creating a base for your wreath.

Juniper – These bushes provide evergreen green foliage that’s great to use in garlands and wreaths, with a fresh forest scent that looks similar to fir trees and pine trees.

Holly – The glossy deep green leaves and red berries add a wonderful pop of colour and shine to any winter creation.

Scots pine – Use branches covered in pine needles to add wonderful smells and texture to your decorations.

Ivy - The green leaves are great for adding variants of green colour and interesting shapes as well as pace and good luck if you believe in the myths.

Tip: If you have any dried flowers left from the summer months, try using them to add an extra bit of interest to handmade cards or decorations. 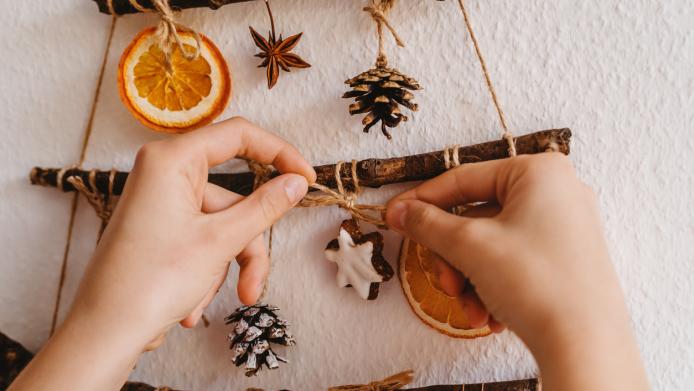 Tree branches – Use large branches that have fallen from UK native trees as a rustic way to hang decorations or create a woodland themed centerpiece on your dining table.

Scots pine – Use the pinecones as a sustainable alternative to plastic ornaments, perfect for decorating Christmas trees.

Mistletoe - Follow tradition and hang sprigs of mistletoe to catch a festive kiss or hang on your Christmas tree.

Tip: Turn fallen acorns into beautiful decorations by painting them gold or leave them natural for a more earthy feel. 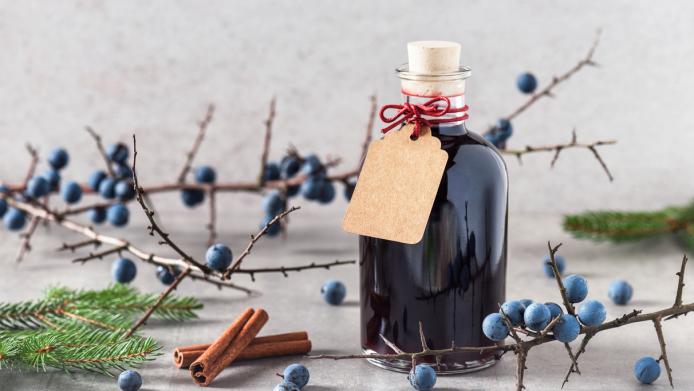 Juniper or Blackthorn - Try using the berries from these plants (sloe berries and juniper berries) to make flavoured sprits. Perfect for presents or to raise a seasonal toast.

Gin and vodka are great base spirits to get started with for this craft.

Tip: Turn old off cuts of wood into decorations, try using a soldering iron to burn on your wintry design. 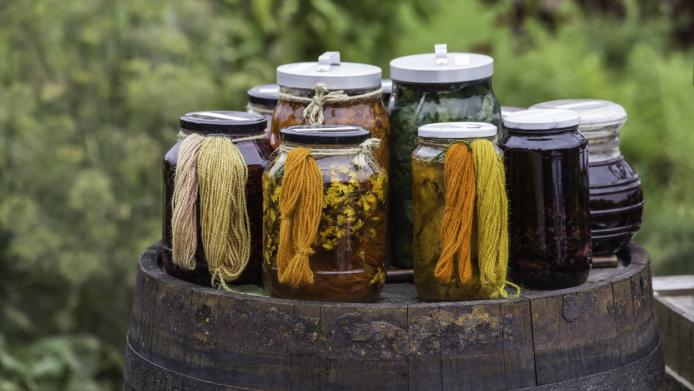 If you're making any homemade presents like knitted jumpers, try making them even more bespoke by dying your wool with natural dyes.

Alder buckthorn – Create yellow dye using green leaves and berries. You can make green dye by using berries which have turned from green to black blue.

Heather – Use the flowers to make clearer yellow and green dye or the whole plant to make golden yellows and brown greens.

You may be interested in another Grow Wild resource 'Paint with petals', a step by step guide to painting with wildflower petals.

Find out more about the species mentioned above including what they look like and where to find them as well as myths and legends surrounding them. 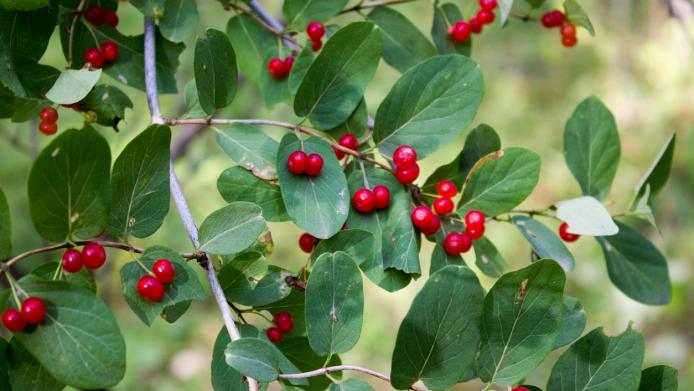 Alder buckthorn is a bushy shrub, with glossy green leaves which turn yellow and red in the autumn. Its twigs are smooth and straight with a purple hue. In the late spring Alder buckthorn produces small flowers and later develops berries which turn black as they ripen.

Commonly used to make natural dyes, alder buckthorn has an explosive history as it’s an ingredient in gunpowder. 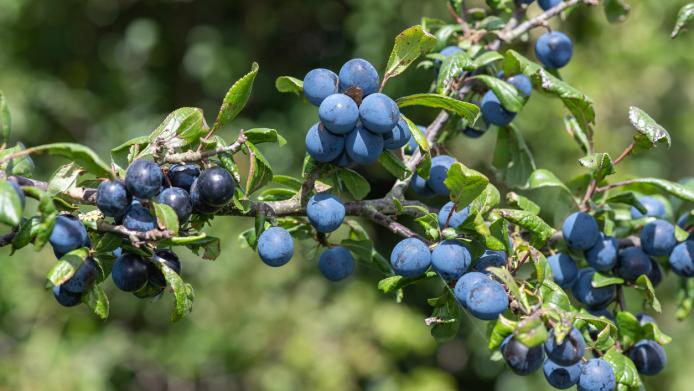 Blackthorn trees are vital for creating a very British and wintry beverage, sloe gin. The dark purple berries ‘sloe’ produced by Blackthorne appear in late autumn and can be used to make edible products such as jam, wine or gin infusions.

In old English folklore people thought that large quantities of sloe berries were a sign that the upcoming winter would bring increased sickness. In Irish folklore however Blackthorn was used to make amulets and spells of protection and heroes were often helped by Blackthorn trees, using the twigs to make impenetrable hedges that would stop any villains in pursuit.

The evergreen is a common occurrence in English hedgerows, with dense branches, tapered green leaves and thorny twigs. Blackthorn can be spotted in the winter by its black spiny branches with small buds. As the timber is tough, it’s traditionally used for making walking sticks. 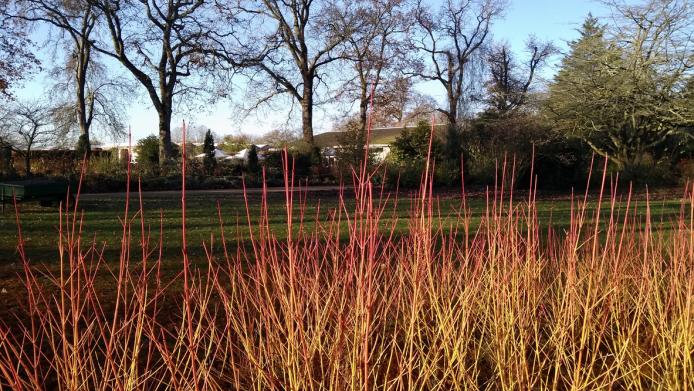 Dogwoods are native to the UK as well as across Europe, Asia and North America. In the UK it's commonly found in woodland and hedgerows but is also a popular ornamental plant due to its autumn and winter colour.    The name comes from its twigs which were used to make butchers’ skewers for meat called 'dags' or 'dogs'. Other uses include the bark in herbal medicine as it's rich in tannins and the leaves used to dress wounds. Wood from dogwood trees is incredibly hard and believed to have been chosen to build the cross used to crucify Jesus Christ. 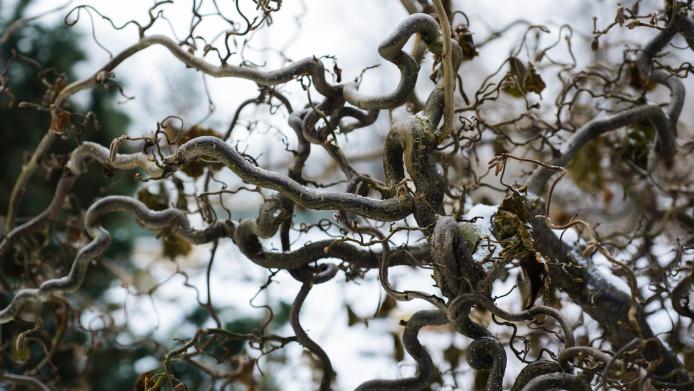 Hazel, mostly known for producing hazelnuts, both for human consumption and for wildlife such as squirrels. Hazel coppice provides timber that is often used by gardeners when creating supporting structures for climbing plants but has also been used to build furniture and create other tools because of its ability to be twisted and knotted.

Hazel has long been thought of as a magical tree, able to protect against evil spirits or referred to as the 'Tree of Knowledge’. The tree is frequently referenced as material for creating magic items from folklore to modern novels. In Harry Potter hazel is the wood used to build Firebolt broomsticks and the wand of Divination teacher Sybill Trelawney. 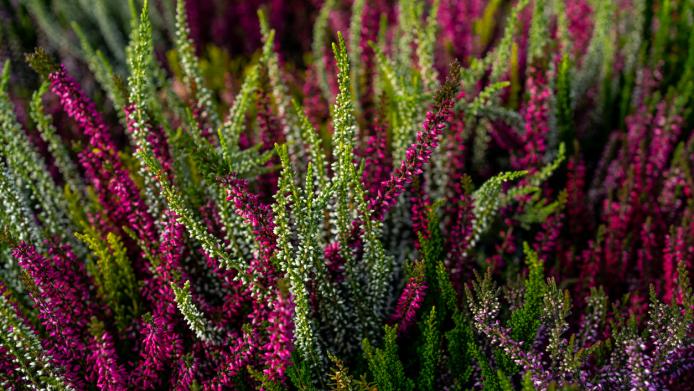 An evergreen shrub with spiky, linear leaves that develops pinkish flowers between summer and autumn. Heather thrives in poor quality soil and is often found in heathland, moors and highlands.

Heather has been used in European folklore for hundreds of years, thought to be a cleansing ingredient in many herbal medicines. In Scottish folklore heather is connected to stories of love, turned white by tears shed from a woman who lost her true love. Despite her despair she wished happiness and luck to others, leading heather to become a symbol of good luck. 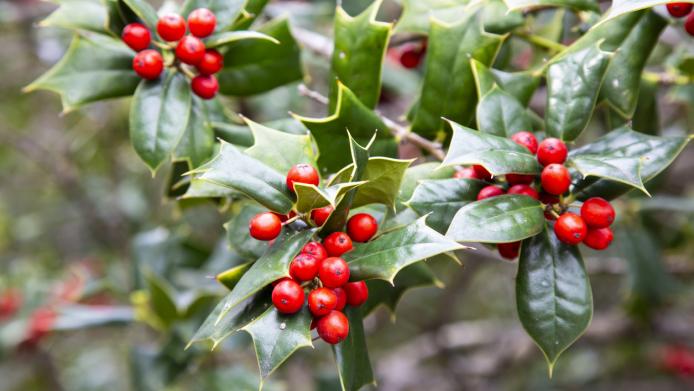 No winter landscape in the UK is without Holly. The dark green spiked leaves and red berries have become symbolic of the winter season, referenced in Christmas Carols and chart toppers, adorning puddings and covering cards.

Links between the plant and winter celebrations can be seen across a variety of religions and beliefs. The plant is of significance to Pagans across Europe and has also been used by Druids in ceremonial head wear. Romans are believed to have thought Holly a sacred plant connected to the God Saturn during the festival of Saturnalia, a festival of gift giving with traditions still found in modern Christmas celebrations.

Christians often decorated their homes and doorways with Holly as it was believed to protect against specters, witches, goblins and the devil who were more likely to appears on holy days. 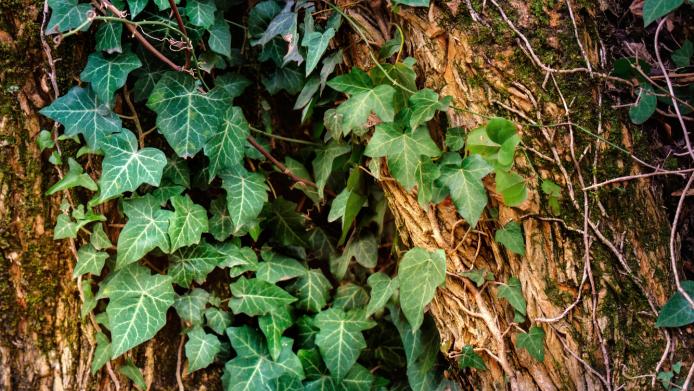 UK native Ivy is a hardy evergreen, thriving in landscapes across the UK from forests to urban cities. Between September to November mature Ivy flowers, producing nutritious and high calorie berries for a variety of birds.

Although Ivy is often thought to strangle trees this is a common misconception as it causes no harm to trees, in reality supporting at least 50 species of wildlife.

In ancient mythology Ivy was associated with the god of wine (Bacchus to the Romans and Dionysus to the Greeks). They were often seen to be wearing crowns made of Ivy as it was believed to prevent intoxication. This myth later influenced the old English tradition of hanging Ivy above tavern doors, to symbol high quality beverages and in Ireland Ivy that grew near homes was considered protection from evil. In old Yuletide traditions Ivy became symbolic of peace and was frequently used in seasonal decorations as a way of bringing this to a household. 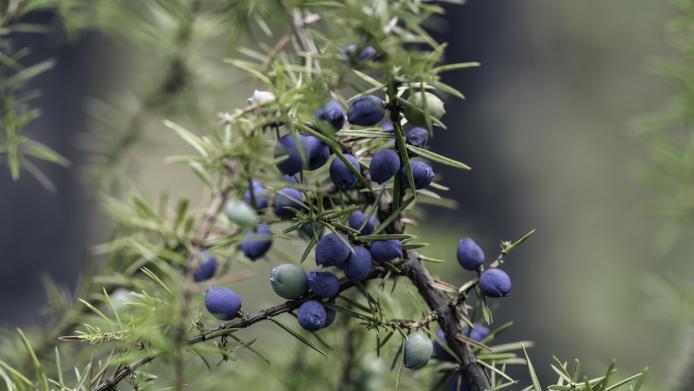 Juniper trees or shrubs are members of the Cupressaceae family that produce fleshy seed cones known as Juniper Berries, a botanical frequently used in gin that provides a piney, citrus like flavour. Unfortunately, Juniper plants in the UK are dwindling due to habitat loss which has led to many beverage producers importing Juniper from abroad.

Although thought of as a British classic, Juniper flavoured spirits we’re introduced to the UK following an alliance with the Dutch in the 1500’s. In the late 1600’s William of Orange’s love for the Juniper infused drink kickstarted its popularity amongst soldiers and coined the term ‘Dutch courage’.

Juniper has been long believed to have medicinal properties; the earliest recorded use of this nature occurs in ancient Egypt on papyrus dating back to 1500 BC. Today Juniper is still commonly used to flavour gin and in cooking as well as in essential oils and perfume. 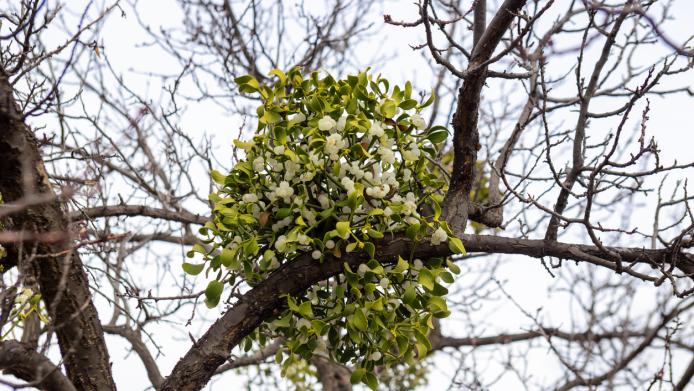 The light green leaves accompanied by white berries of mistletoe have become synonymous with winter celebrations, best known as the place to kiss a loved one during Christmas.

The parasitic plant grows on host trees, commonly oak trees in the UK, pulling the nutrients it requires from the tree. As mistletoe is evergreen you can often see round clusters of mistletoe growing from trees even once they’ve dropped their leaves.

The plant has become part of winter decoration partially due to its attractive sprigs but also because it was believed to protect against evil, cure diseases and symbolise fertility. Greek mythology even believed that mistletoe would allow you to travel to the underworld. 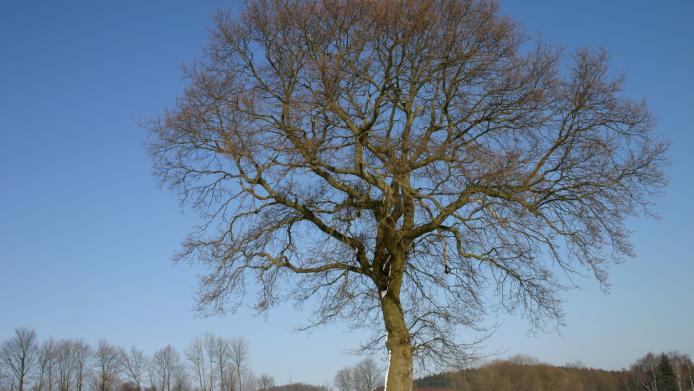 Britain’s national tree the Oak supports more life than any other native tree species in the UK. Thought to be a symbol of strength the Oak tree has been used to represent British culture and nature for centuries.

As well as it’s iconic wave shaped leaves, which contribute to the reds and browns of autumn colour in woodland landscapes, the Common Oak also produces yellow catkins when in flower. You may be more familiar with acorns, frequently dropped by Oak trees at the start of autumn. You can often spot acorns being collected by animals such as squirrels, buried away for winter fuel, whilst those that don’t become Oak sprouts the following spring.

Oak trees have been sacred to many gods who were thought to rule over thunder and lightning, including the Celtic god Dagda as their height means they are frequently hit by lightning. Druids often practiced pagan rituals amongst oak trees, couples would frequently marry beneath them or carry acorns as a lucky charm and in the winter Yule logs were made from Oak branches. 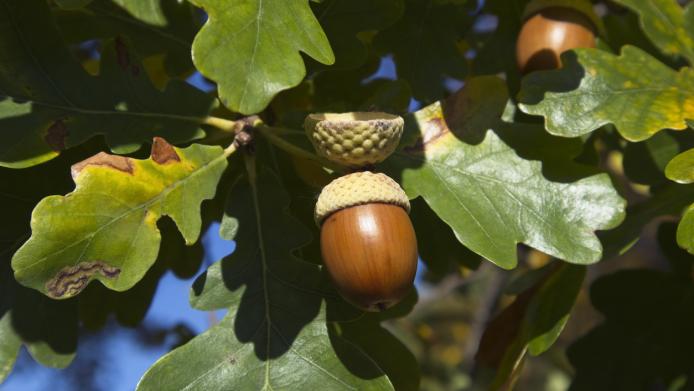 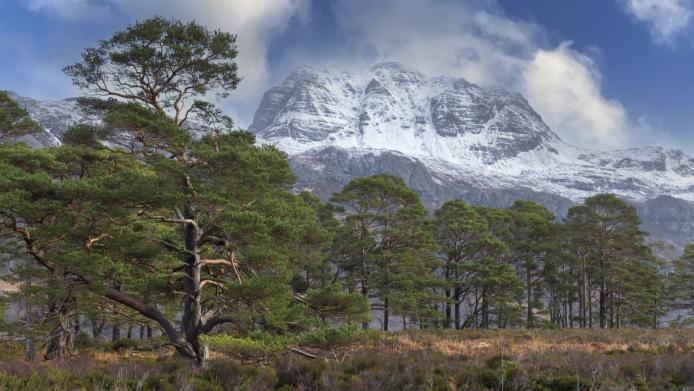 Scots Pine is the only pine tree native to the UK and is the national tree of Scotland. The evergreens able of growing to 35m and living for 700 years and can be found in abundance in the Caledonian pine forest in the Scottish Highlands.

The tree is a softwood, due to its strength the wood is commonly used in construction and joinery, but the tree's resin can also be used to make turpentine a component of varnish and paint.

Scots Pine plays an important part in supporting other organisms. As well as providing homes for animals the bark of these trees supports epiphytic lichens and mosses which absorb nitrogen from the air. Scots pine is associated with over 200 kinds of mycorrhizal fungi, exchanging nutrients with these through their roots. 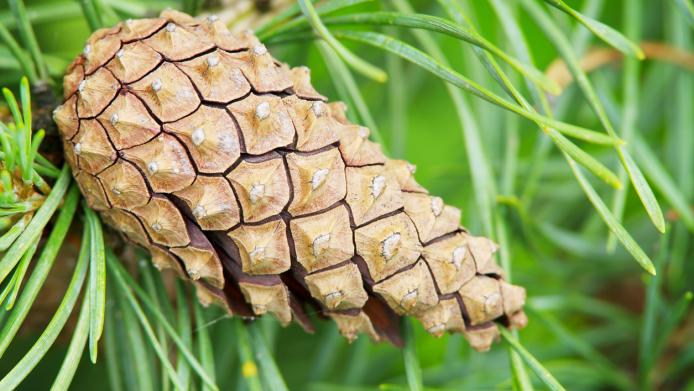